Got to sleep in this morning. It really feels good to get back to a somewhat normal night’s sleep after being sick for two weeks and not sleeping.

I got out of bed thinking about going for a motorcycle ride, and then I looked quickly at the weather. Rain – a 90% chance – and 49 degrees. Damn… no ride today. I fixed up a big cast iron skillet full of breakfast for three days and had this morning’s breakfast. I poked around through e-mails and such, then looked at weather more closely. Less chance of rain, and radar was clear. I am outta here for a few hours!

Went over to Port Angeles to try to find more earrings. When you have ten it can be difficult to find enough of them when there is no mall around. True to form, I could not find any so I guess I need to make a trip to the mall in a town called Silverdale SW of Seattle.

Anyhoo, I was going to head west out of P.A., but the clouds looked rather threatening so I thought I would head back east toward Sequim and check out a road I saw on my way over. It headed up into Olympic National Park, but was closed nine miles up but I thought what the hell… it’s a ride to someplace I haven’t been yet so I went up there

It was a nice ride on a two-lane that was not real busy. A little drizzle fell but not horrible, so it was a decent ride. I went up nearly to the closed area, but found a nice area to turn around in so I stopped and put on rain pants and headed back down the hill. I then stopped again and took these two pics: 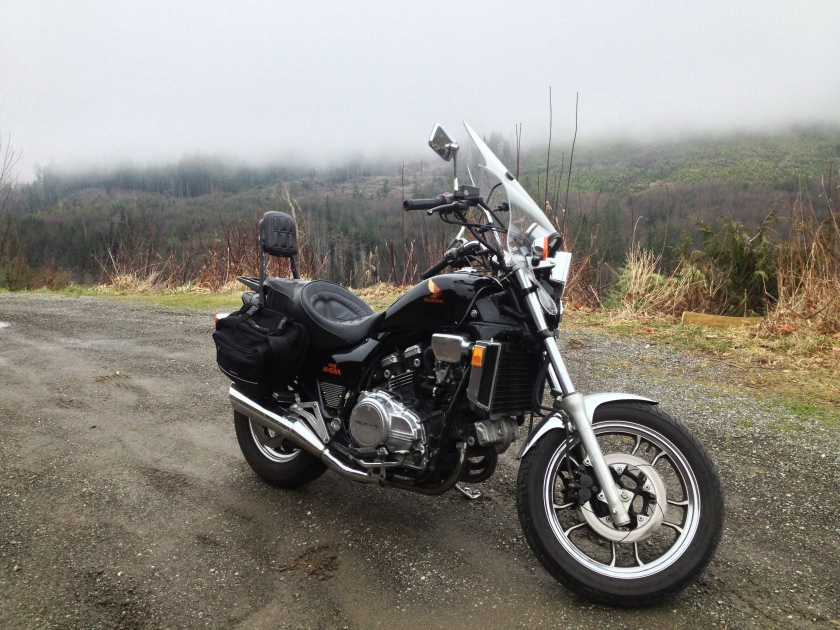 I got back onto 101 and continued east. I went past Sequim and on past the 7 Cedars Casino in Blyn to the turn off for Diamond Point. I had heard about the area and had not seen it either so I turned there and checked it out. It is a nice little area on the water a few miles back on a two-lane. That was a nice little jaunt as well.

I headed back toward the highway, found another shortcut on a back road and started back toward home since it was cooling off quickly. I decided to cut through going past John Wayne Marina and took another back road into Sequim. I headed north toward the Strait and into the area around Dungeness Schoolhouse. I was going down the road and saw this field with a huge flock of swans hanging out: 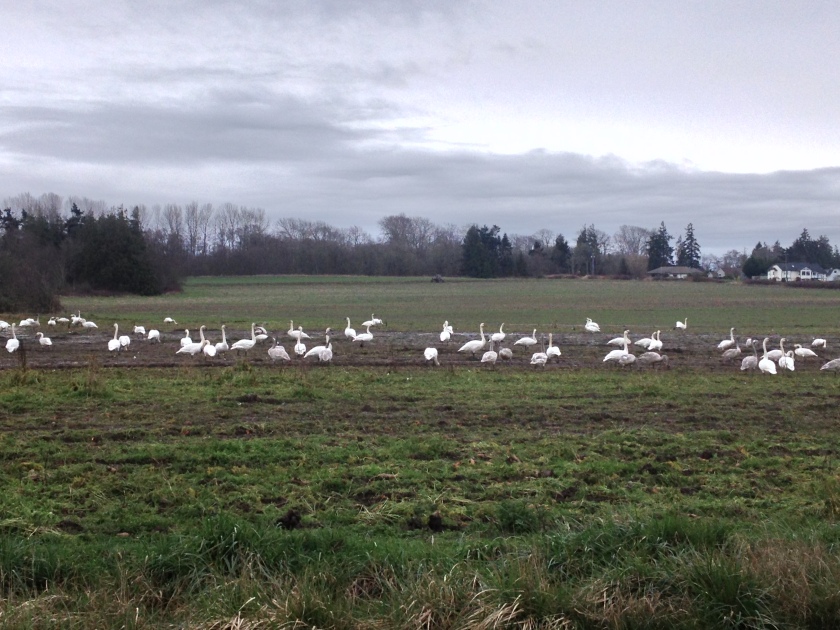 From there I headed back and called it a day. Riding can sure be soothing. It is just you and your bike; riding just feels so free it is like an escape. I can really see how it can lure people to want to go out and do it full time. It really brings a two lane backroad to life. I cannot wait to head down toward the Hoh Rainforest again and experience the highway on the way there, riding through that winding section of 101 around the beautiful Lake Crescent, and a few of the other winding sections I was on when I was coming up here the first time back in September. I also cannot wait to finish the rest of 112 out to Neah Bay.

There are so many cool things to see, and doing it on a bike just adds a new dimension to exploring.