I have been a little lax in my postings lately, but things have been happening. I am writing this tonight, with the thought of fresh crab on my mind. Yep… tomorrow morning at the buttcrack of dawn (or shortly thereafter) I am getting up to go out on a boat and do some crabbing with my first license. And no, you will not be seeing me on “Deadliest Catch” anytime soon.

First, the weather here has been absolutely beautiful. Sunny and 60s and 70s most generally, with some fog in the mornings, and it has been windy as well but that is the only downside.

Last week I went back to Kansas for a family reunion. I was really looking forward to seeing everyone but was fearing the weather since it IS Kansas and it IS summmer. I do not tolerate heat very well, and the midwest heat and humidity I really cannot stand. I know I know… I live on the ocean, but it is a bit different here believe it or not.

I started out my weekend with a two hour massage. Needless to say, I was not worth a damn after that was over. I had to wait a few minutes to drive since it felt like I was drunk after that flogging. Man… I got worked over but good.

I started out the trip Thursday by going over to Seattle to stay in a hotel so there would be no worry about getting to Sea-Tac on time for my Friday flight. I also needed to go to an Apple Store to pick up a few things so I was able to knock that out as well. I have really avoided malls the last several years as much as possible. It is the same stores in most of them, and there are just too many people for me since I am not a big fan of crowds. The mall was pretty big but laid out weird and had lots of restaurants (not fast food) I had never heard of before. I got what I needed and left to go get a bite to eat before my next stop.

After my late lunch, I headed over to a cemetery to see the grave and memorial of one James Marshall Hendrix. I really had no idea where to look but thought to myself “How hard can it be to miss a memorial monument I read about being built?”, so I just took a right and drove. Right in front of me was this monument with three young guys sitting in it and I thought “This must be it”… and it was. 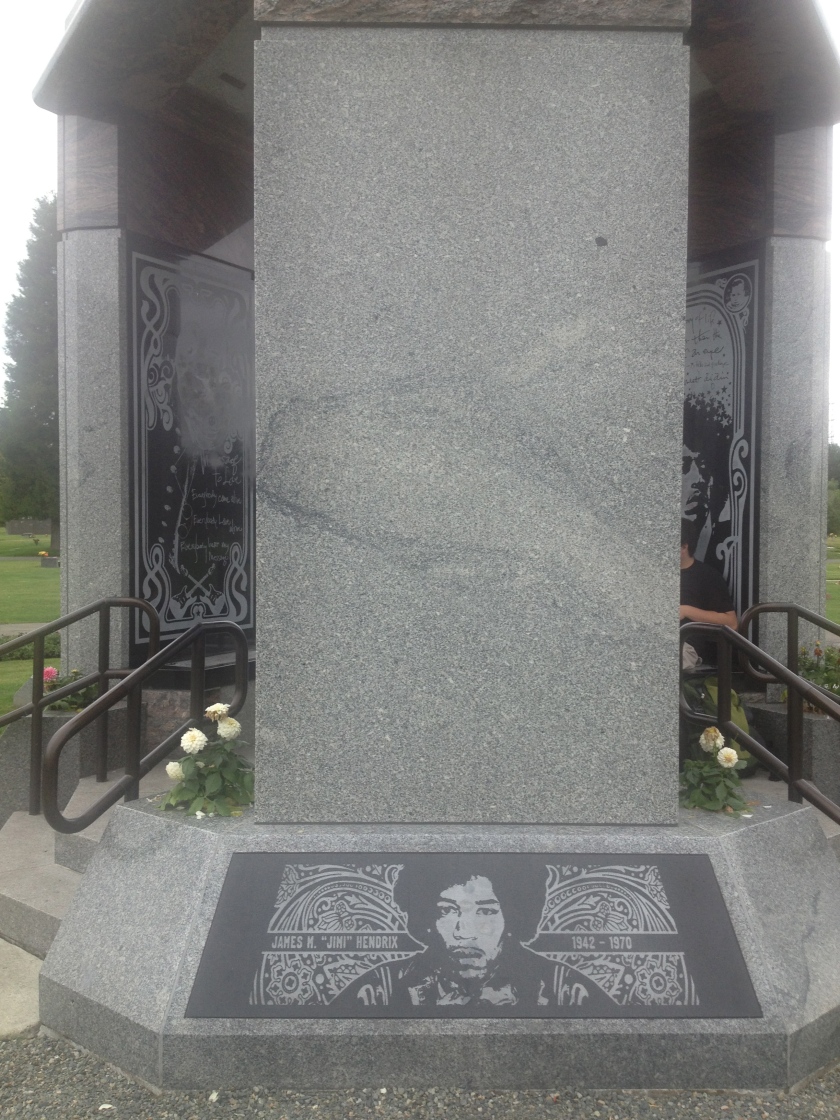 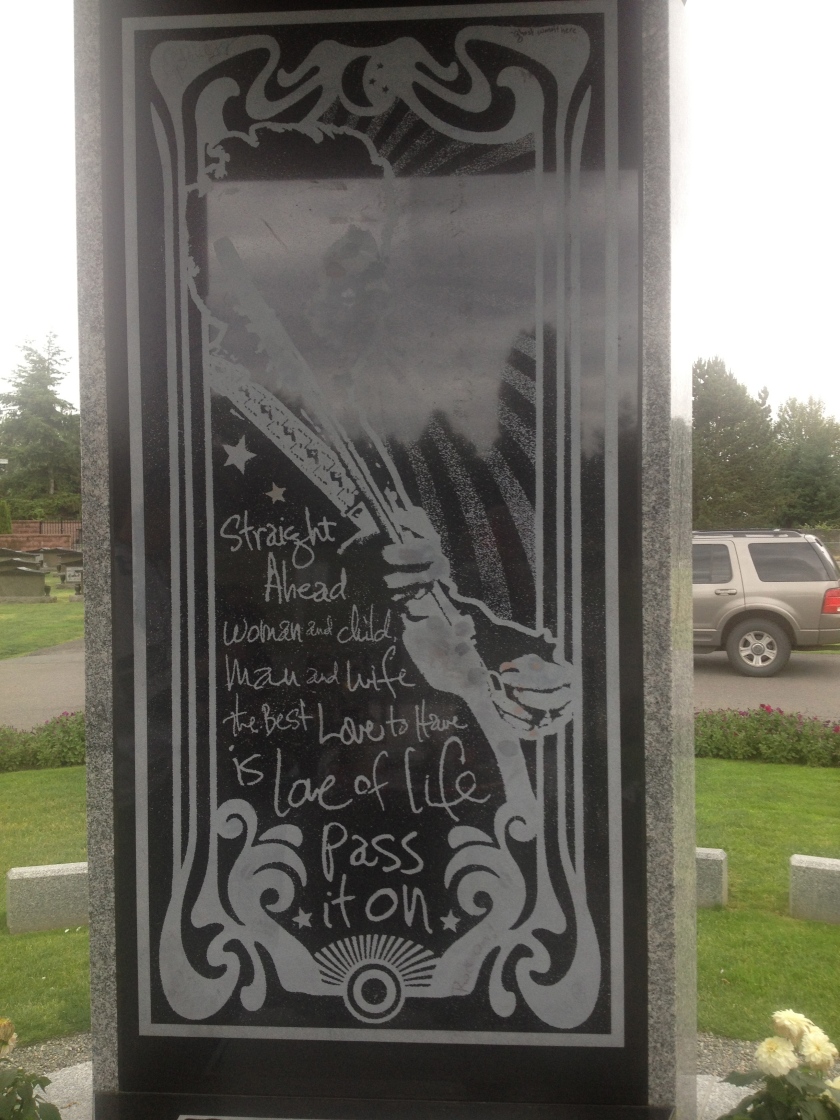 I walked around it, looking at the memorial and was really thinking about what it was – the final resting place where the most influential and innovative guitarists of modern times lies. It was interesting to see, but was strange at the same time. As you can see by the picture, it is a three-sided monument with etchings of the man and his words engraved in the granite. The engraved song lyrics were actually taken from his handwritten sheets. The pictures of him had lipstick prints on the faces placed by adoring fans, and there was a tall, rectangular stone in the center – kind of like a table but had a hole in the center for a vase of flowers. There were ashtrays on it and a few flowers left by fans.

The three guys sitting inside got up and moved so I could take some pictures. As I was winding up my visit they were smoking some pot sitting on the granite benches in front of the panels. It just seemed so fitting in this place.

I left and went riding around a bit to kill some time as I wandered towards my hotel. It was a decent hotel for the price – a Ramada – and was close to the airport (which WAS the idea). I used my AARP discount and got a great rate on a king room. I will definitely be staying there again.

I got up the next day, did my hotel breakfast, and got ready to go find my parking garage. I finally found it, got shuttled over to the airport, and moved through security with the rest of the cattle through the maze of stanchions.

Flying is such a pain in the ass. Take off your shoes… don’t look a certain way… don’t act funny trying to NOT act funny. Oh well, it is a three day drive to Kansas each way so this IS a bit quicker.

This was the first time I have flown Southwest Airlines. I thought I would give them a try. The fares are really comparable to other airlines that you get a reserved seat on, so I am not sure about the advantage of that. It is kind of nice in a way, but I do not think it is worth the trade-off of possibly getting shoved to the back of the back of the plane. I must say that I was not impressed by the flight attendants either. Not overly friendly, and really quite rude a few times. I thought I had mistakenly gotten on a Delta or United flight instead of Southwest.

As I was flying to KCI, it struck me that when I leave… I will be flying back home to Seattle! I have not been away from this area in the nearly one year I have been up here and that never really crossed my mind before.

I got to Kansas and Meghan, my youngest daughter who had driven down from SD, was with my parents to greet me at the airport. It was good to see them. I got to see Meghan at Christmas, but had not seen my parents since before I moved up here to WA. We left and went to my sister’s house (also had not seen in a year and was good to see her too). We left there and went a few blocks over to my middle daughter Chelsea’s house to surprise her. We all went out to my parent’s house and hung out a bit, and I got to see Kona, the dog Meghan brought that was with me in CO for a while. Co-dependent animal. Then later on me and the girls went to see a fireworks display at a city park. It was a decent display I must say.

The next day was the reunion at a county park shelter house. We got there early and set things up. It was actually a really nice day – cool, and a breeze. My weather fears were abated. Yay! The reunion was my grandma’s family on my mom’s side, and most everyone (except for me and Meghan) was local as far as I know. I saw people I had not seen in years; some many years, some a few. It was really good to see everyone and catch up on life’s happenings. My oldest daughter Angie was there with her husband A.J. (but her girls stayed home), and Chelsea was there with Luke and Emery. Moronically, I did not get any pictures (Hey… I just invented an adverb!). I was too busy talking with everyone and just did not think about it until it was too late so I hope someone will send me some pictures (nudge, nudge). I also noticed how everyone but me was getting older. Funny how that works.

We all said our “see ya’s” and went back to our places in the world. Meghan and I went back to my parent’s house and we hung out taking it easy since her and I both had to leave the next day to get back.

I packed up my four slabs of Rosedale ribs in my suitcase and it was off to the airport. Meghan and Kona followed us over and we stopped on the shoulder of the road to say goodbye so she could go north to head home and I could head back up to my home. KCI is the easiest airport to get around in and through. I wish they were all like that.

Dammit. It was hard to say goodbye to everyone since I was not in town very long and was not really done yet. It was really a fast trip – too much to do here at work, and the bookings and airfares were too expensive to leave earlier or stay later. The weather there was pleasant so that was a nice surprise. The reunion went very well and those who worked on getting it arranged did a fantastic job. 🙂 I got on the plane to head home.

I was even less impressed by these flight attendants on the return flight. In my book, Alaska Airlines and Frontier Airlines have the best crews. All of them have been very friendly on all the flights I have been on, and they will be the airlines I will try to book my flights on in the future. I did meet a very nice lady (Hi Terry!) who is the principal of an inner-city school in Indianapolis. She was headed to Seattle to see her son and his family. We talked some and she asked if I could send some pictures of the area where I live to help some of the kids at the school to see what is out there in the world.

It was a fun time even though it was way too quick. Next time I will try to time it differently so I can visit a little longer.

We walked 18 miles to the baggage claim and chatted until we got our bags and parted ways. I got outside and it was a warm one in Seattle. I got to my car and started the long trek home. Ahhh… back on the ferry, out of the traffic, hustle and bustle, and then across the waters of Puget Sound to the Peninsula. It is such a beautiful place.