Well that just ain’t right. I wanted to stay around the Redwoods today but I had to abort the mission and get gone. The weather forecast around Crescent city was not very good, and actually has spread up to where I’m at now – in a hotel near Portland, OR. I was hoping to stay on the coast all day and tonight but the weather forecast is looking sour. I wanted seafood too.

I got up this morning and left Crescent City and it has been snowy and/or black ice conditions on the highway most of the day. That has been the case pretty much since day before yesterday. I’ve pretty much had my fill of it.

I will probably have to get up and hit the road at a decent hour to beat the weather and get to Seattle. It’s been a short trip but it has been fun and very relaxing. I have got to see some new territory as far as Southern Oregon and Northern California and I have to say the area is pretty nice. I could probably live there. It still reminds me a little like Florida but without the palm trees. Not the big fancy towns but the smaller little seaside villages. I’ll be doing some journeying all up and down the West Coast for some time to come I have a feeling.

I did get to drive US Highway 101 from the Oregon border with California all the way up to Florence; this is where I took a right and went east to make time. I was hoping to drive all of he way up but I couldn’t do it. As far as US Highway 101, I’ve driven all of it in Washington, most of it in Oregon (except between Tillamook in Florence), and little bits of it in the LA/Huntington Beach area down in California. I do want to do the whole thing in one trip at some point. I’ll be taking my time doing that too.

Along the Oregon coast on US 101 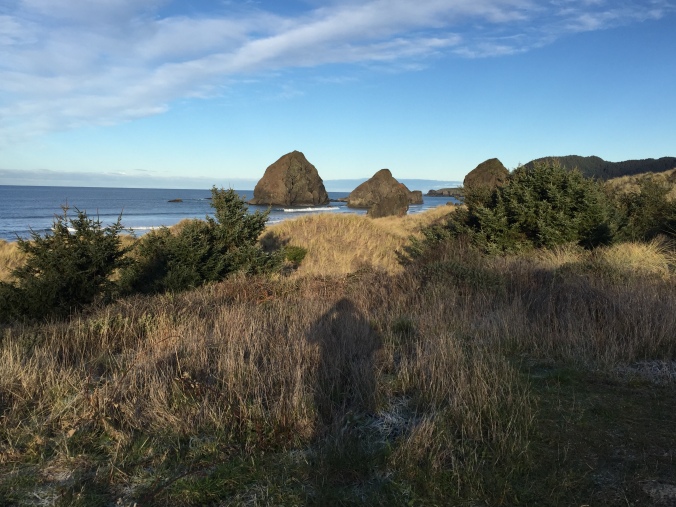 Along the Oregon coast on US 101

I did get to see some great ocean views. It was fantastic being back by the water. The tide was headed out and I could have had a great time looking at birds and tide-pooling, but on top of the storms moving in it was not really warm. I will be back and it will be warmer.

I stopped at Camping World to grab a few items for the trailer. Those who know me would understand how weird that is for me. I did find a few things on sale IF I joined the Good Sam reward club thingy so I did. Just my savings from the sale items I bought paid for it. I should be able to get some use out of it, such as gasoline discounts and sale items. In Oregon there is no sales tax. A spending spree can be pretty good between that and sales!

So, all in all this was a good adventure. A little too rushed, but you get what you get when you can get it. I’m more relaxed and feeling better. I am excited to travel even more now than when I left. I picked up a key ring with the family crest on it and it says out family motto is “Fortune favors those with fortitude”.

I do believe that there is truth in that…at least there is for me.