Slept like a rock last night and ready for the day after a nice, long hot shower. Time to head out of the KOA.

My first destination was not very far so I got a leisurely start to Tulelake, CA. I’m headed to see WWII Valor in the Pacific National Monument Tule Lake Unit. This is the second one of these I have been to (the other was Hart Mountain in WY).  They are not only quite sobering, but embarrassing and shameful.  There are two parts to this historic site but I only visited one of them this time – Camp Tule Lake. I drove past Segregation Camp on my way out of town and will come back another time to see that.

I began my visit by stopping at the fairgrounds office, which has a small visitor center (for the camp) in it along with a museum containing local history about the camp, battles with native peoples and farming. Outside they have one of the housing buildings and a guard tower on display. That’s a pretty somber thing to see.

This space was for a family of four

While looking at the buildings I met a guy working on the fairgrounds on the other side of the fence. He was telling me that they are expecting over 500 immigrant farmworkers to come in to dig up all the strawberry plants in the fields around the area so they house them in buildings on the fairgrounds. They ship them off and transplant them elsewhere to grow the fruit. The season is too short here to keep them going and I guess it gets bad in winter and kills the plants so they transplant them.

He was telling me that there are not enough people to hire locals and it is only for a month or so. Either they don’t want to work or it is not worth quitting other jobs to do that for only a month.

I then drove over to Camp Tule Lake to see it but it was closed off and I had to look from a distance. They offer tours of the compound in summer but they are done for the season.

I found it interesting that the Japanese prisoners (and later German and Italian POWs) were used as slave labor to farm since the local men were over fighting the war and crops needed to be tended to by someone. All I knew of was the other immoral and disgusting behavior behind this rounding up of human beings for simply being “different”.

Just down the road is Lava Beds National Monument, my next stop.

This whole area is desert-like with scrubby brush and grasses and some trees. In the Monument there are sprawling lava fields and lava tube caves you can go in. So that’s what I did.

I went into a cave called “Catacombs” and it was eerie. I got inside and turned off my lights. It was way beyond dark inside. I didn’t go very far in because I came up to a spot that had a pile of rock from a collapsed section of the ceiling of the tube. I decided that was not for me and turned around. On the way out the ranger at the gate told me that they have found over 800 of these caves and 13 or 14 new ones this year alone. 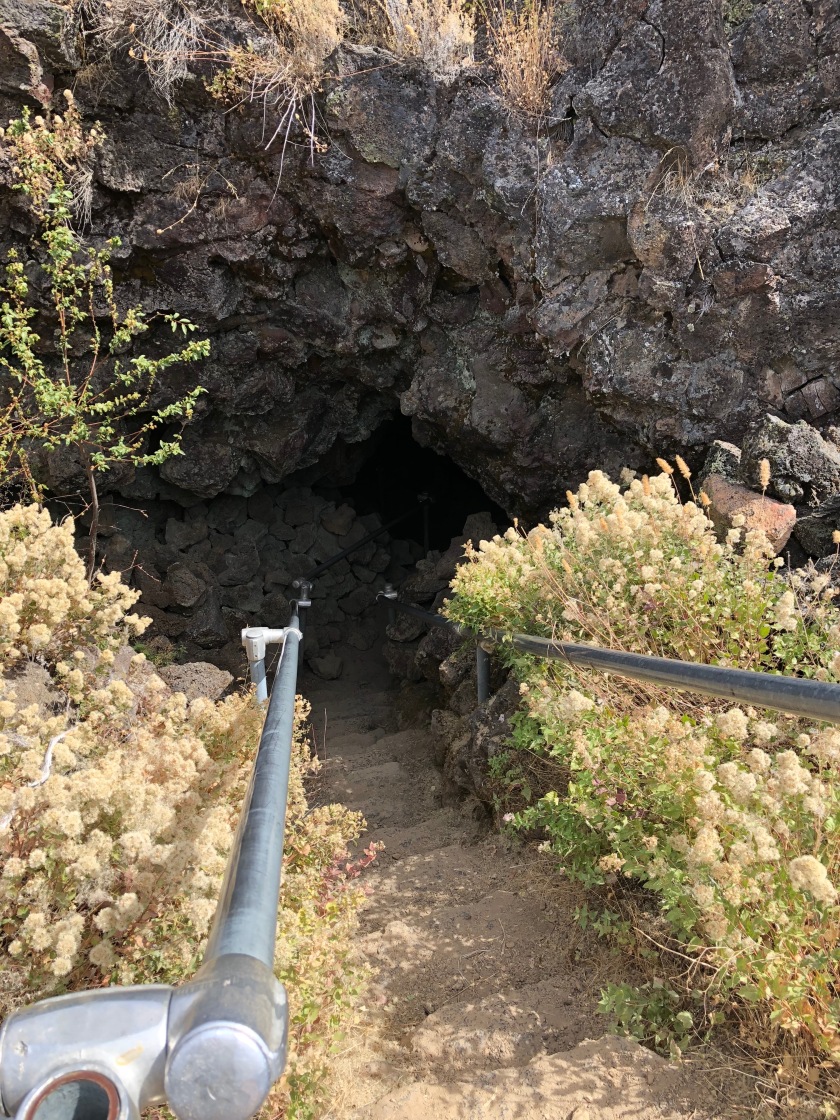 Inside Catacombs lava cave looking out

Next I went over to the Petroglyphs section of the Monument. I looked and there does not appear to be many of the petroglyphs left with the weathering that is attributed to draining Tule Lake down to gain more farmland. They say it has uncovered more ground the blows around and erodes the soft rock they are carved in. Not really much carving to see from where I was.

I left to head further south into CA. It was strange to be going down the road and seeing highway signs for Reno and Winnemucca, NV and San Francisco. I really haven’t driven that far but it ends up I am only a few hours from Reno.